The quieter you become,
the more you hear. -Ram Dass 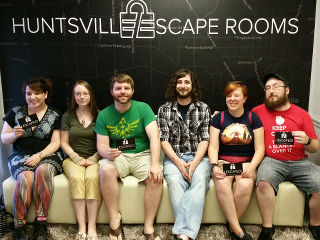 Samantha's friend and former roommate decided she'd like to go to Huntsville Escape Rooms for her birthday. If you haven't heard of this, Escape Rooms are a recent craze where a small group of people are locked in a room with a series of puzzles and a time limit. The goal is to find clues and solve riddles that will eventually let you unlock the door and "escape". A quick google search suggests that Escape Rooms are soon to be in every major city, and they can vary in theme and scope.

Sam and I arrived first, and waited for the rest of the team. The place was busy on a Saturday night. I could see other teams of people exiting the building, high on success, or resilient in defeat. "We still hadn't found everything before the time ran out. Next time we'll get it!"

Once the rest of our team arrived, we gathered in the lobby. The Huntsville Escape Room's "flight attendant" greeted us jovially and made sure our paperwork was in order. We had purchased tickets online a week in advance, but there was still a matter of signing waivers. Once complete, we were handed off to a room attendant who briefed us on safety, procedures, and the story of our chosen room.

It is perhaps worth noting that we were not truly trapped in this room. Beside the door lock, our ultimate goal, was a green "exit" button. This would allow us out in case of panic or potty breaks. However, if used, that player may be forfeiting the game. Still, I believe it was thoughtful of them to include this. Teams are also monitored by the room attendant through close-circuit cameras. A text display in the room could then give hints or gentle reminders not to actually destroy the room.

Our chosen puzzle/room was named “Psych Ward”. I overheard other patrons say it had a low success rate, assumably because of a more difficult set of problems. The story itself was about a mad scientist who is held in a psych-ward but makes plans to unleash biological weapons on the town. We are to discover his dastardly plans and escape the room. Unfortunately, this story was lost in the puzzles. Some items stayed with the theme: crazy scrawlings on the wall, empty pill bottles, and circled passages in psychology text books. But who exactly let this patient have some of the more esoteric devices? Why are we puzzling our way out of this room while the presumed hospital staff are now ignoring and obstructing a team of investigators?

The puzzles we faced were not terribly difficult. Some seamed ripped straight from the first chapter of a Mensa Mighty Mind Benders book. If you've played adventure games like Myst, 7th Guest, or Dr. Brain, then you may already know what to expect. I do feel we saw a good balance between math problems, word problems, and spacial problems. People with those individual skills can handle their puzzles with easy.

To be fair, we did see a few hints from the aforementioned room-attendant. I still didn't see any puzzle we couldn't handle, and our hints often reinforced what steps we were already taking. I'm told that teams can request to not receive any hints. But without knowing what to expect, it may help keep things enjoyable for your first time.

I think the biggest challenge of this Escape Room was just time management. They threw a large number of puzzles at us in a limited time. I feel good about our team's performance in that regard as well. We escaped the room with 8 minutes to spare. Second to time-management, may be team-management. No fighting for leadership. No sticking all 6 players on a single puzzle. We all understood the game, and spread out to work in 2's or 3's.

Overall I'd say my first Escape Room was mearly good, not great. It was entertaining. I'm glad to have tried it. But it was also kind of expensive, and doesn't feel like it would have any replayability. That may be the biggest challenge for the Escape Rooms businesses themselves. Turning out new content, changing up puzzles, and keeping people interested in the fad for as long as they can.

Update: A week after my mediocre experience with the escape room, I believe I have in fact been bitten by the bug. I daydream about the next challenge. What nearby city might offer bigger rooms, deeper stories, and who of my friends I can convince to go with me.