Things that are forced, grow for a while
but then wither away -Lao Tzu 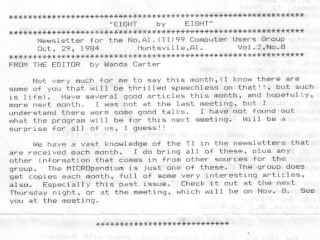 30 years ago today, The Terminator was #1 in the box office, Debi Nicolle Johnson graced the cover of playboy magazine, and Vol.2 No.8 of “Eight by Eight” newsletter was published for the members of the North Alabama TI-99 Computer Users Group

Fast forward a few decades. After this year's retro gaming and computing night, I had a TI-99/4a and assorted peripherals donated to my collection. As I dug through the boxes, what I was most impressed with finding were documents. Next to software disks, the original documents and writings for these old computers are to be coveted. Some previous owner of this computer had put the original users manual into a three ring binder. Nestled in that binder with the manual, were 2 years worth of xeroxed, stapled, and mailed newsletters for a local Computer Users Group.

User groups were and are a great way to disseminate knowledge. Sure, your computer probably came with a manual, but those barely scratch the surface. Computers books weren't as readily available at your local library. Reaching out to others, with a shared interest, was a great way to learn the ins and outs of your own machine, as well as get reviews and demos of what other hardware or software was available. People would even write in the newsletter that there seemed to be a “TI information void” before finding this user group. To this day, user groups are a fantastic way to learn about specific systems and/or softwares.

This now 30 year old newsletter follows the same general format found in the other 2 years of newsletters reviewed. It opens with general club reports from the Editor, President and various Committee chairs. Of particular note, this issue has a great guide on how to add a second floppy disk drive to the TI-Peripheral Expansion Unit, often refereed to as the “p-box.” This unit came with space for one drive, but many drive controller cards could support 2 drives. This required some hacking of the case and the power supply, to allow for the second drive.

Also of note, is the news that a major TI-99/4a peripheral manufacturer was filing for bankruptcy. Looking back from where we are now, it should be hardly surprising, as the Computer system it self was released 6 years prior, and discontinued by TI 2 years before this publication. Which brings me to my next point.

The whole arch of these newsletters (at least Vol 2 and 3, that I have) becomes all the more interesting when we frame them with the fact that the TI-99/4a had already been discontinued, and many newer and more robust home computers were taking it's place. In February of 1985, one member even writes, thanking TI for getting out of the home computer market. Citing that the TI-99/4a and it's peripherals were now cheaper, and other companies seemed freer to create 3rd party software and hardware. It would seem to be true then, that the hay-day of the little TI-99/4a would come in this time after TI's official support. 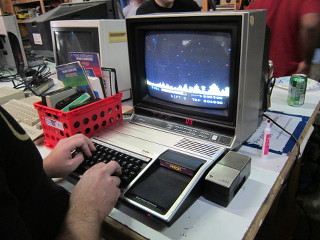 Subsequent newsletters are full of tips and reviews of products that could expand your computer's memory, improve performance of core components, and squeeze every last bit out of your code. However, even with all this great information and software available, we can see the tone of the newsletters decline. Pleas for participation become more urgent and promises are made, of better things to come. On the one hand, it is claimed many times that the turn out from the North Alabama 99er's exceeds that of other user groups in the area. However, as 1985 becomes 1986, we see a lot more events that involve either other TI-99 user groups from other areas, or user groups for whole other systems. It is never really said, but I imagine that this kind of “mixing” became more important, just to keep interest going.

I feel this is all the more obvious when a bit of googling found me 3 more volumes, from just two months after my last hard-copy newsletter. It seemed like the club had imploded. First, Wanda was no longer editor, Then the same woman who had stepped in as editor, helped fill the role of president. Entire committees were no longer mentioned, and others seemed to be doing double-duty. The actual colapse of the group is only speculation on my part. But the evidence of drama was clear, and many members may have finally lost interest and/or upgraded away from their venerable TI-99/4a.

I will say that, upon finding this kind of treasure, I was thrilled by the fount of knowledge present. The people and the drama were of little interest to me. However, as I read and studied more of these newsletters, it is the human side of things that I find requires more rumination. To see people drawn together into a community based on shared interest, is something humans have done before, and are still doing. So while preserving the machines themselves is a fun technical problem. I would say that it is also the words and ideas, expressed by these early computer hackers, that are to be coveted.